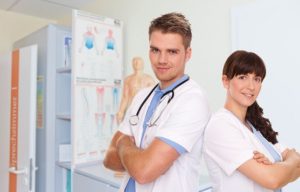 The Flexner Report[1] is a book-length study of medical education in the United States and Canada, written by Abraham Flexner and published in 1910 under the aegis of the Carnegie Foundation. Many aspects of the present-day American medical profession stem from the Flexner Report and its aftermath.

The Report (also called Carnegie Foundation Bulletin Number Four) called on American medical schools to enact higher admission and graduation standards, and to adhere strictly to the protocols of mainstreamscience in their teaching and research. Many American medical schools fell short of the standard advocated in the Flexner Report and, subsequent to its publication, nearly half of such schools merged or were closed outright. Colleges in electrotherapy were closed. The Report also concluded that there were too many medical schools in the USA, and that too many doctors were being trained. A repercussion of the Flexner Report, resulting from the closure or consolidation of university training, was reversion of American universities to male-only admittance programs to accommodate a smaller admission pool. Universities had begun opening and expanding female admissions as part of women’s and co-educational facilities only in the mid-to-latter part of the 19th century with the founding of co-educational Oberlin College in 1833 and private colleges such as Vassar College and Pembroke College.

Background to the report

In 1904 the AMA created the Council on Medical Education (CME) whose objective was to restructure American medical education. At its first annual meeting, the CME adopted two standards: one laid down the minimum prior education required for admission to a medical school, the other defined a medical education as consisting of two years training in human anatomy and physiology followed by two years of clinical work in a teaching hospital. In 1908, the CME asked the Carnegie Foundation for the Advancement of Teaching to survey American medical education, so as to promote the CME’s reformist agenda and hasten the elimination of medical schools that failed to meet the CME’s standards. The president of the Carnegie Foundation, Henry Pritchett, a staunch advocate of medical school reform, chose Abraham Flexner to conduct the survey. Flexner was not a physician, scientist, or a medical educator, although he held a bachelor of arts degree and operated a for-profit school in Louisville, Kentucky.[2]

At that time, the 155 medical schools in North America differed greatly in their curricula, methods of assessment, and requirements for admission and graduation. Flexner visited all 155 schools[3] and generalized about them as follows: “Each day students were subjected to interminable lectures and recitations. After a long morning of dissection or a series of quiz sections, they might sit wearily in the afternoon through three or four or even five lectures delivered in methodical fashion by part-time teachers. Evenings were given over to reading and preparation for recitations. If fortunate enough to gain entrance to a hospital, they observed more than participated.” The Report became notorious for its harsh description of certain establishments, for example describing Chicago’s 14 medical schools as “a disgrace to the State whose laws permit its existence… indescribably foul… the plague spot of the nation.”

When Flexner researched his report, many American medical schools were “proprietary”, namely small trade schools owned by one or more doctors, unaffiliated with a college or university, and run to make a profit. A degree was typically awarded after only two years of study. Laboratory work and dissection were not necessarily required. Many of the instructors were local doctors teaching part-time, whose own training left something to be desired. The regulation of the medical profession by state governments was minimal or nonexistent. American doctors varied enormously in their scientific understanding of human physiology, and the word “quack” flourished.

Flexner carefully examined the situation. Using the Johns Hopkins School of Medicine as the ideal,[5] he issued the following recommendations:[6]

Flexner believed that admission to a medical school should require, at minimum, a high school diploma and at least two years of college or university study, primarily devoted to basic science. When Flexner researched his report, only 16 out of 155 medical schools in the United States and Canada required applicants to have completed two or more years of university education.[7] By 1920, 92 percent of U.S. medical schools required this of applicants.[8] Flexner also argued that the length of medical education should be four years, and its content should be what the CME agreed to in 1905. Flexner recommended that the proprietary medical schools should either close or be incorporated into existing universities. Medical schools should be part of a larger university, because a proper stand-alone medical school would have to charge too much in order to break even financially.

Less known is Flexner’s recommendation that medical schools appoint full-time clinical professors. Holders of these appointments would become “true university teachers, barred from all but charity practice, in the interest of teaching.” Flexner pursued this objective for years, despite widespread opposition from existing medical faculty.

Flexner was the child of German immigrants, and had studied and traveled in Europe. He was well aware that one could not practice medicine in continental Europe without having undergone an extensive specialized university education. In effect, Flexner demanded that American medical education conform to prevailing practice in continental Europe.

By and large, medical schools in Canada and the United States have followed Flexner’s recommendations down to the present day. Recently, however, schools have increased their emphasis on public healthmatters.

Consequences of the Report

To a remarkable extent, the following present-day aspects of the medical profession in North America are consequences of the Flexner Report:

The Report is now remembered because it succeeded in creating a single model of medical education, characterized by a philosophy that has largely survived to the present day. “An education in medicine,” wrote Flexner, “involves both learning and learning how; the student cannot effectively know, unless he knows how.” Although the report is over 100 years old, many of its recommendations are still relevant—particularly those concerning the physician as a “social instrument… whose function is fast becoming social and preventive, rather than individual and curative.”

Flexner sought to reduce the number of medical schools in the U.S. to 31, and to cut the annual number of medical graduates from 4,400 to 2,000.[8] A majority of American institutions granting MD or DO degrees as of the date of the Report (1910) closed within two to three decades. (In Canada, only the medical school at Western University was deemed inadequate, but none were closed or merged subsequent to the Report.) In 1904, there were 160 M.D. granting institutions with more than 28,000 students. By 1920, there were only 85 M.D. granting institutions, educating only 13,800 students. By 1935, there were only 66 medical schools operating in the USA.

Between 1910 and 1935, more than half of all American medical schools merged or closed. This dramatic decline was in some part due to the implementation of the Report’s recommendation that all “proprietary” schools be closed, and that medical schools should henceforth all be connected to universities. Of the 66 surviving MD-granting institutions in 1935, 57 were part of a university. An important factor driving the mergers and closures of medical schools was that all state medical boards gradually adopted and enforced the Report’s recommendations. In response to the Report, some schools fired senior faculty members as part of a process of reform and renewal.[10]

Impact on African-American Doctors and Patients

Flexner viewed blacks as inferior and advocated closing all but two of the historically black medical schools. His opinions were followed and only Howard and Meharry were left open, while five other schools were closed. His perspective was that black doctors should only treat black patients and should serve roles subservient to white physicians. The closure of these schools and the fact that black students were not admitted to many medical schools in the USA for 50 years after Flexner has contributed to the low numbers of American born physicians of color and the ramifications are still felt more than a 100 years later.[11]

Furthermore, given his adherence to germ theory, he argued that, if not properly trained and treated, African-Americans posed a health threat to middle/upper class whites.[12]

“The practice of the Negro doctor will be limited to his own race, which in its turn will be cared for better by good Negro physicians than by poor white ones. But the physical well-being of the Negro is not only of moment to the Negro himself. Ten million of them live in close contact with sixty million whites. Not only does the Negro himself suffer from hookworm and tuberculosis; he communicates them to his white neighbors, precisely as the ignorant and unfortunate white contaminates him. Self-protection not less than humanity offers weighty counsel in this matter; self- interest seconds philanthropy. The Negro must be educated not only for his sake, but for ours. He is, as far as the human eye can see, a permanent factor in the nation.”[12]

When Flexner researched his report, “modern” medicine faced vigorous competition from several quarters, including osteopathic medicine, chiropractic medicine, electrotherapy, eclectic medicine, naturopathy andhomeopathy.[13] Flexner clearly doubted the scientific validity of all forms of medicine other than that based on scientific research, deeming any approach to medicine that did not advocate the use of treatments such as vaccines to prevent and cure illness as tantamount to quackery and charlatanism. Medical schools that offered training in various disciplines including electromagnetic field therapy, phototherapy, eclectic medicine, physiomedicalism, naturopathy, and homeopathy, were told either to drop these courses from their curriculum or lose their accreditation and underwriting support. A few schools resisted for a time, but eventually all either complied with the Report or shut their doors.[citation needed]

Although almost all the alternative medical schools listed in Flexner’s report were closed, the American Osteopathic Association (AOA) was able to bring a number of osteopathic medical schools into compliance with Flexner’s recommendations and produce an evidence-based practice.[citation needed] The curricula of DO and MD awarding medical schools are now nearly identical, the chief difference being the additional instruction in osteopathic schools of osteopathic manipulative medicine. The remaining DO schools were adamant in preserving such training. Before and after Flexner’s report, by including these treatment methods in patient care and sometimes foregoing other caustic medical or surgical options available, clinical outcomes often dramatically improved morbidity and mortality.[citation needed] This dramatic convergence of osteopathic and biomedical training demonstrates the sweeping effect of the Flexner Report, not only in the closure of inadequate schools, but also in the standardization of the curricula of surviving schools.